Come to think of it, this is the first time we got to sit together here, isn’t it? The others never want me on the sofa. Bad Yoru, they always say. Heh. They don’t like mud. I get it—the one thing I always have is mud. But they’re not here right now, and strangely, I feel comfortable, being able to sit on the sofa like you, like everyone else. It makes me feel almost human.

I don’t know why that matters. I’m a dog, after all.

Uh-huh. I look in the mirror, there I am. Floppy ears, tongue that hangs out all the time because it doesn’t fit in my mouth. Black fur that’s never really clean. Sometimes I get this weird feeling that I expect to see something else. I can’t explain why, though.

The moon is going to be full again tomorrow. Maybe for the last time. Everybody’s been antsy, I can smell it. Do you think their hopes will come true? Will it finally be all over?

I hear them talk about the things they want to do once the Dark Hour is gone. The lives they’ll finally return to, before this year, before it all happened.

Me, I still don’t remember anything. All I know are the crazy adventures we had. Hunting Shadows. Running away from the octo-arm menace with the swords. So much green and red, except it’s not Christmas. Heh heh... huh, Christmas. I’m not sure why that popped into my head. I don’t think I’ve ever had one. It’s coming up soon, isn’t it?

Well, this year has been fun in a way. Terrifying in others. I’m sure you understand.

… Hey. While we’re still here, there’s something I never mentioned. Just to let you know, this probably isn’t a good idea, but I feel like I have to tell somebody eventually. I figure that somebody might as well be you.

It’s about the Shadows. It took me a while to realize that you guys couldn’t hear them, not the way I did. Sometimes the Shadows say things you’d expect someone chasing you with a knife would say. Other times, they’re confused, they don’t know how they got there, they don’t remember anything, they ask for help.

I don’t know what the worst one is. When they beg us to stop hurting them, or when they beg to die. That usually comes right after they say they can’t control themselves and take a swing at us.

I mean, you can’t understand them, and... they’re Shadows. You do what you need to do. If it helps, I don’t blame you. I never did. Sorry, you’re probably better off not knowing any of that after all. Honestly, I’m glad you can’t hear the voices. Some nights, they get to me bad enough that I don’t want to go out anymore.

I still do, of course, because you’re going. And I’ll come tomorrow, of course.

There’s another thing I wanted to ask.

What do you think will happen to me when this is over?

I don’t remember a life before this all started, so maybe I’ll just forget everything again when it ends. Or maybe it’ll be even worse. Tell you the truth, part of me has this bad, sinking feeling that I might just disappear. The idea scares me a lot. I might just be sitting here, panting at you like it’s another Sunday evening. But I’m really scared.

Can you do me a favour? If I do disappear, you’ll remember me, won’t you?

Ha… maybe I’m being silly. It goes without saying that you will, after all. You’re the boss. And, maybe I won’t disappear, which means I’m scared for nothing. And, maybe if I do, it’s not that scary.

I know you can’t hear me, but thank you for listening anyway. 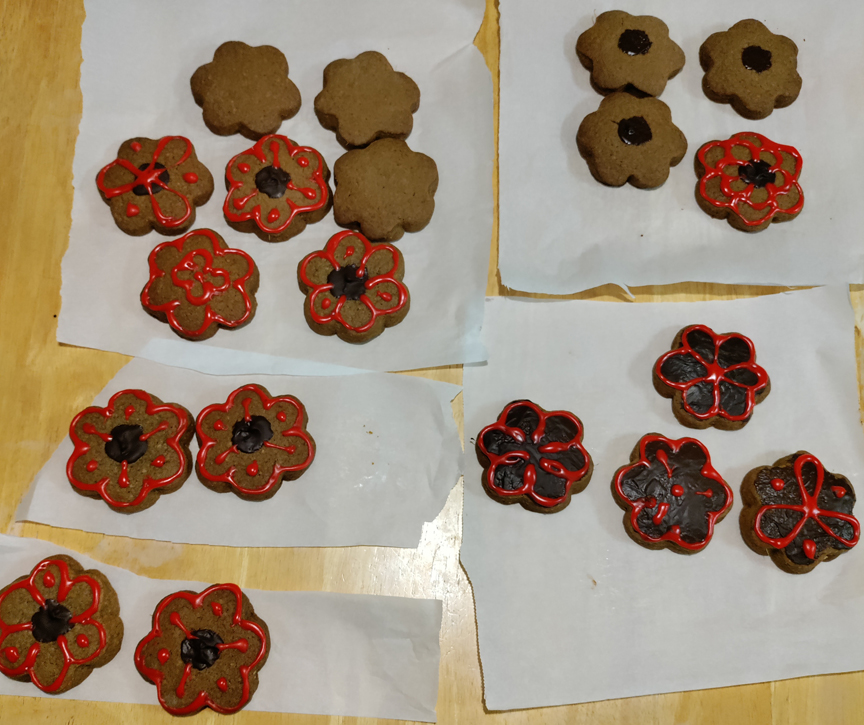 1/2 cup unsalted butter
3/4 cup brown sugar
1 egg
1 teaspoon grated ginger
2 teaspoons spices*
1 teaspoon vanilla
1/4 cup molasses
2 cups flour
1/2 teaspoon baking soda
pinch of salt
1. In a medium bowl, cream together the butter and sugar until smooth. Add the egg, followed by the spice and vanilla. Finally, add the molasses, then the dry ingredients, mixing until it comes together in a nice cohesive dough. Chill for at least an hour.
2. When you are ready to make the cookies, preheat oven to 350F and line the baking sheet with parchment paper. Roll the dough out to about 1/4-inch thickness, cut into desired shapes, and place on baking sheet. Bake for about 10 minutes, then cool completely on racks before icing*.
*Spices
1 tablespoon ground ginger
1 tablespoon ground cinnamon
1 tablespoon ground nutmeg
1/2 tablespoon ground cloves
1/4 tablespoon ground pepper
*Icing
2 cups sifted confectioner's sugar
2.5 tablespoons water
1.5 tablespoons meringue powder
I just used a coloured squeezy tube for the icing since I couldn't be bothered to shop for those two ingredients or a piping thing.

Not An Update: I managed to beat Nanowrimo this year, but like, actually in November this time. The final score was 55349 words. I used an Arise fanfiction* to do it. What has been helpful is using my phone to write drafts: 1) I can lie in bed and swipe away, 2) editing becomes obnoxious, which encourages me to push forward regardless of any immediate dissatisfaction with my prose, a Good Thing as drafts are a quantity game.

*You could say this is cheating, but I don't see fanfiction as significantly less difficult than an original work. Everything that makes writing hard is still intact regardless of what kind of story you choose to write. Certainly there are some things you can worry less about, such as world/lore/characters, and you can leverage some baseline investment and knowledge from your readers who are most likely fellow fans, but ideas aren't the hard part. Writing the darn story is the hard part. Ideas are cheap, technicals are expensive; give me the riches.

Not professing to be a big fan of Arise's story, either. Well, if I'm writing fanfiction, you can be sure it's because I'm not happy. I have little idea what I'm supposed to do with the lore in this bloody game. While not unusual that they go all galactic on you a la JRPG fare, it does happen in a sudden and highly expository manner where you can only watch in shock as the plot collapses under the weight of its partly-realized ambitions. I was uncannily reminded of the Star Ocean 3 "plot twist"--if you've played Star Ocean 3, I'm sure you know what I'm talking about. Yeah, it was like that. That's Arise.

To this day, I have some deep-seated insecurities related to writing, even though you'd hope by now my writing is probably not that bad. There's about 200K words worth of material from the last two years that'll likely never see the light of day, including this one. (I've shared some brief snippets with kind friends, but that is it.) So, I have little idea why I'm even making this post, considering I've "beaten" Nanowrimo before and while it wasn't the right month, who cares, really.

Well, speaking of bucket list items, I'd also like to become a millionaire at some point. Just casually tossing that out there before everything on this forum gets flushed into the void.

In Topic: Japan's top 50 vgm of all time

I heard that there was a "Tales of" Orchestra 25th Anniversary concert album. My expectations were low, until I saw that the performers were Tokyo Philharmonic Orchestra (performed Symphonic Fantasies Tokyo, one of the best VGM orchestras in existence). Then my expectations went high--there's no way they can waste such a stellar band on some second-rate scoring, right? And I AM writing a post about it, so: lo and behold, it's an excellent CD containing orchestra versions of Tales mothership title openings!

Great arrangements, great audio--headphones highly recommended. Some of my favourites:

And for "meaning of birth" fans, this is the best we could've hoped for!

In Topic: Who are you?

No musical talent here, but listening to music sure still is one of my favourite pastimes. Even come from a wannabe-audiophile family; check out one of our living rooms bwahaha

Every once in a while, I enjoy hanging out here and getting my VGM to either fly or be destroyed (mostly destroyed). HQ speakers have a way of amplifying the good and exposing the bad. Why so many? Well for example, if you're feeling a little more bass, you can turn on some of the bigger ones (cue Memories of Dust causing the whole couch to vibrate ooooph hohoho), or you can turn on the tube amp for a softer tone, or... well, some models are better at different things and it's really nice to have the option to tune the sound for your listening pleasure. An honest to goodness joyful hobby that I wish I could share with everyone who doesn't have a crazier setup. Like I used to think crying over music was a really silly concept but I started to understand it after going through a gauntlet of nice speakers.

Btw those little Dynaudios sitting on the brown speakers are sooo nice for their size, it's almost unbelievable. They puuuuuuunch.