A year later, the person that got themselves banned has moved on,

Too bad he's always in troll mode; his whole life's a desperate plea for attention.

Also 10k lucci in one round yay 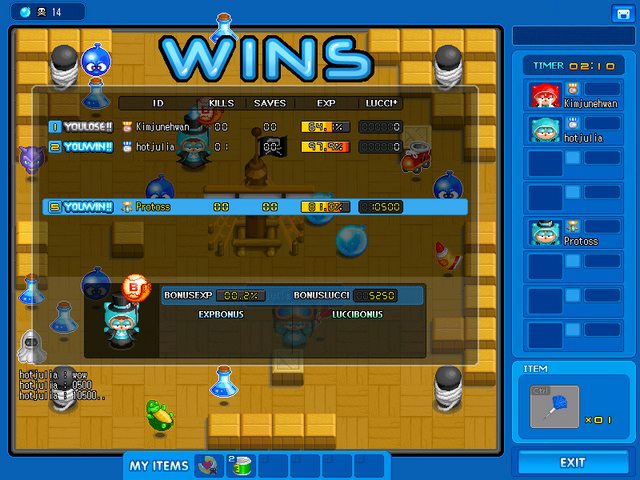 I might use Zerg sometime here and there as well.

Add Protoss if you're playing.

After watching the video I'm not sure if I wanna play o.O I feel like I'll be completely destroyed without being able to set one bomb/bubble/balloon.

Pretty sure that's ladder competition, so not ALL gameplay will be that competitive.

Combo Tempest actually kills monsters instead of just leaving them frozen, so it may work.

Where's Jim when ya need him?

Because it's obvious and it's more than just "bomberman".

I'm specifically referring to pieces of time, dropped by every mob at Time Temple. Which is a level 90+ area.

It's normally called Crazy Arcade / BnB but they had to lameify the name ):

It's essentially the same thing as Balloono from OMGPOP, but better.

Here's a video of the competitive aspect (the "PvP" of this game, but pretty much all games are)


In game you'll find loads of items in blocks, here's a list of the majority of them.
You can also find coins, or "lucci" which is the in-game currency. You can use it to buy avatar decorations and other items in the shop.

Nexon Korea kept the NX-usage low by keeping avatar / background decorations permanent, but there's speculation that with NexAM's marketing strategies, some items that are usually permanent may end up being limited. I guess we'll see soon enough.

Beta starts next Tuesday, so I hope some of you guys'll try it out eventually. It's ridiculously fun.

Who cares about KR, CRAZY ARCADE IS COMING

KR was fun, kinda got boring when no one played and limited amount of cars

Offtopic: OMG NEXON US IS BRINGING BnB. I would take BnB(Poptag now) over KR anyday