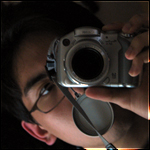 I am iamflip. Nice to meet you. And stuff. :B

This calls for cake!

Sadly no. If it was so, I'd have the person/people hunted down already...

Oh wait... considering I'm not too active / MT's not really alive much these days, I should hardly give a carp. The effort to defame me is... not only useless but quite... stupid. So why should I stoop to such levels when it's not worth it? =P

Apparently what happened was that the hacker managed to get in just after the patch (Karen was in school at the time). The hacker set in a new PIC (that Karen resetted easily), then targeted mostly everything on MariettaRC (only stuff that couldn't be sold remained, like her zhelm) and a few equips on DrMarioPhD. Both of these characters still exist thankfully, and all of her other characters were not affected.

Yeah, a lot of her stuff is extremely expensive, and at this point unrecoverable unless someone has billions of mesos and NX to recover it all for us. However as bad as it does look... this really could have been much worse. And me and a few others are trying to help her get back up and stuff.