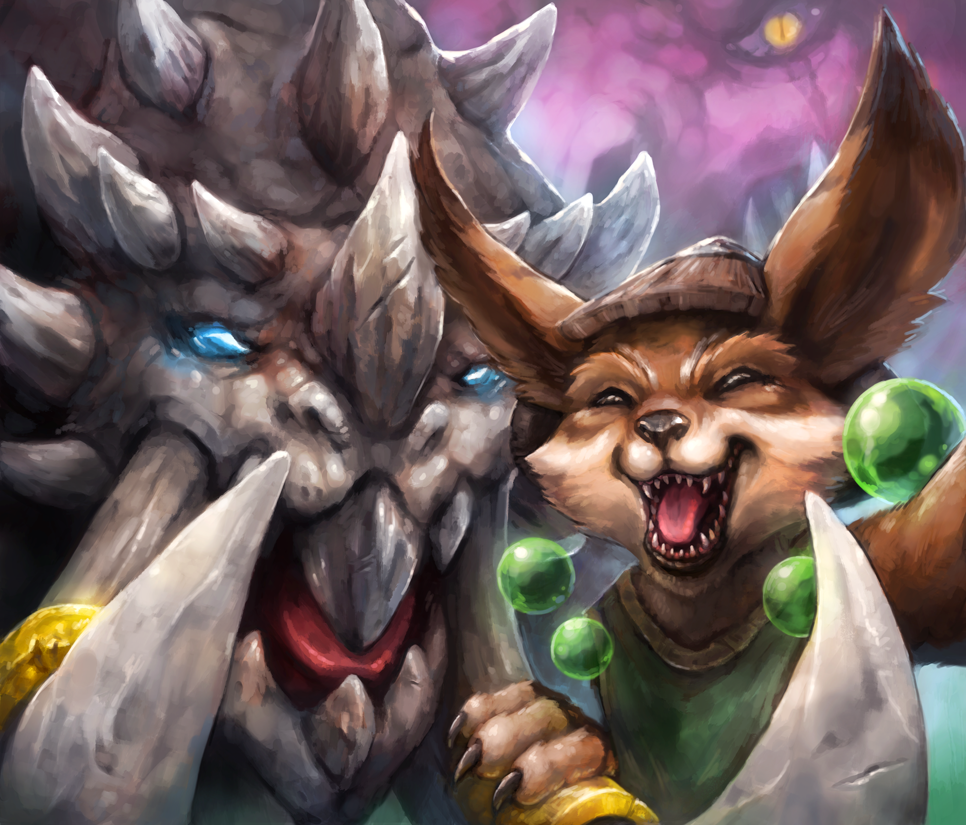 Also hi. Work doesn't leave me with much energy, so here's my first and possibly only drawing this year, happy WoW character portraits for 2020. Not Worse:tm: clause still applicable.

Been trying some quick doodles. The kind where you grab a pen and go, letting yourself mess up as much as you like. About 90% of the hands I draw are mangled. Eh, just try again. Anatomy is deeply complex, and there's a lot more to it than proportions. Stuff's gonna look rubber and crooked sometimes, it's OK. It's really OK.
When I was younger, I'd get these occasional bouts of feeling awful about not being as good as I "should" be. Nowadays, I don't care much. After growing a bunch of skills from scratch, my perspective from those years ago is more or less settled:

Draw an owl. Then draw another owl. Then draw 100 owls. If you're somewhat critical while doing this, you can trust that mistakes will eventually correct themselves. For this reason, I don't get worried or upset about learning how to code. Sometimes it's a frustrating process, but that's just part of it. My comp sci friends can give up on me all they like! 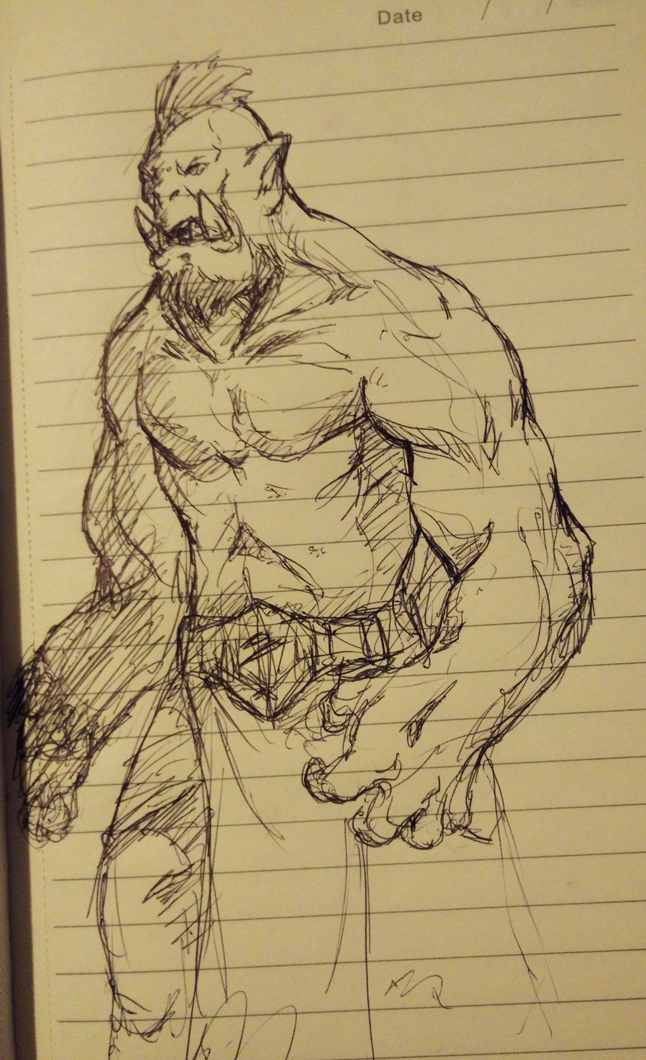 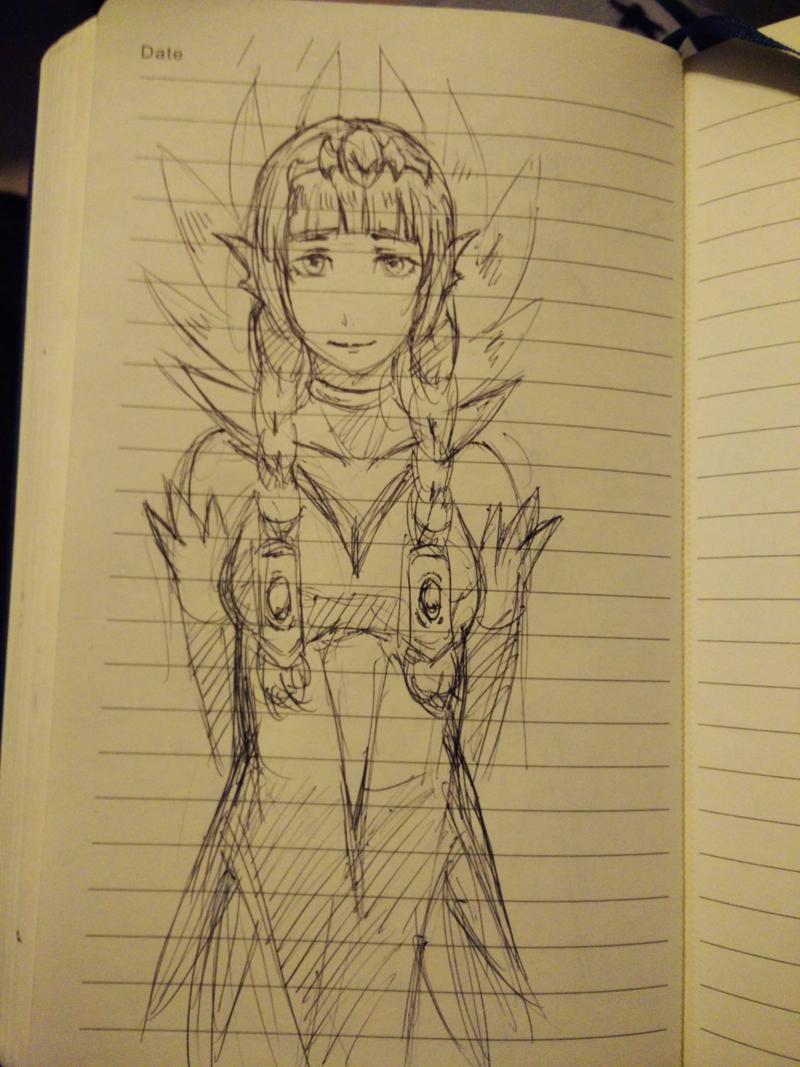 Nanowrimo (50K word novel challenge) is one of those bucket items that I've thought about doing every once in a while. So even though it's not November, I went for it and wrote about 69K over 26 days.

Of course the story is a complete disaster, that barely needs be said. When I arrived at a loss as to what to do with certain characters, they would vanish never to be mentioned again. It's a tale plagued by laziness, the worst disease to a craft. Also, the protagonists spent most of the time running around uselessly. They tried very hard but seemed incapable of doing anything right. Well, I wrote an ending and everything. They died, the end! Nobody's allowed to read it, so I'm a-spoilin'. I did occasionally question why I write stories like this.

Writing is >90% editing, anyhow. Even if I made an initial grind of 69K words, all it means is that I did sub-5% of the work. Nanowrimo is a feat, but not a great one.

On the bright side, that all made me want to doodle the cast! Here's the haul. 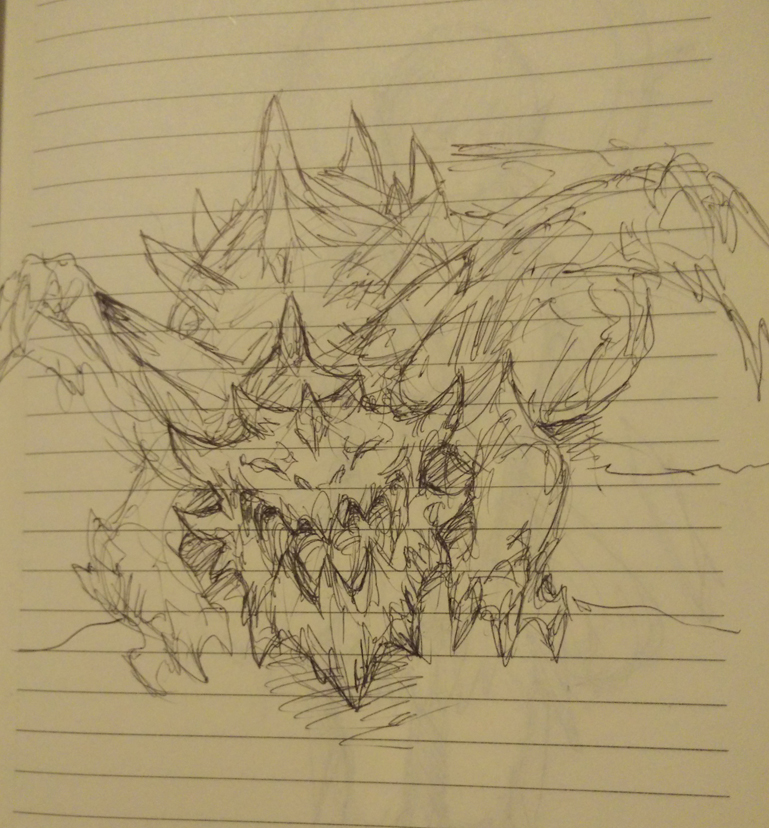 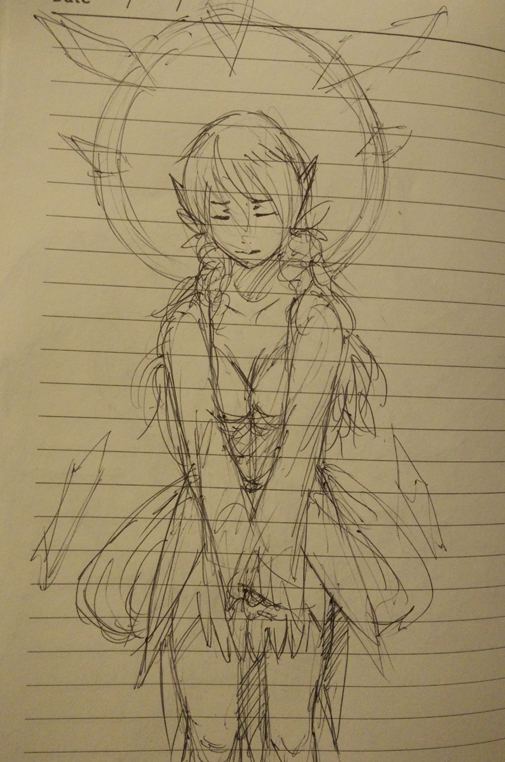 Lol hands what are they? 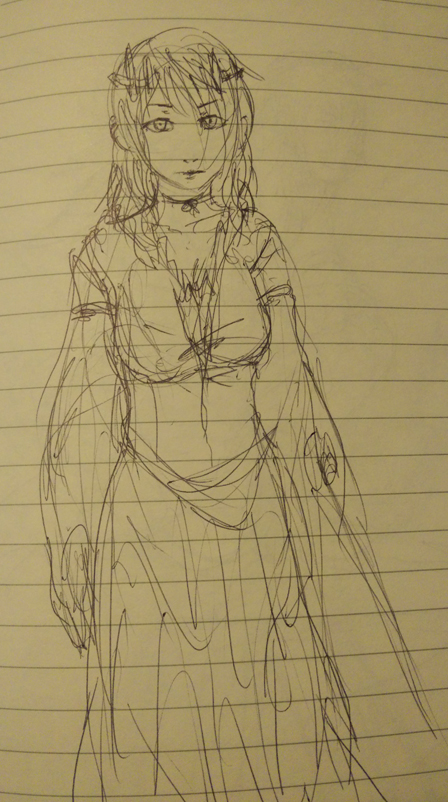 I named this character after someone I saw randomly on the communications software my company uses. I don't even know her.

Tickles me to imagine, someone spots you in the cosmos and lo you become the villain of their story 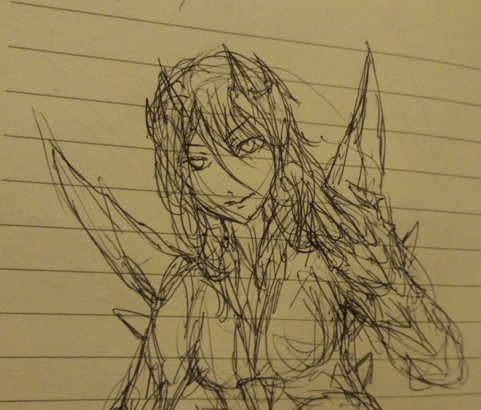 Ursun Lahar, a real stuffy Pride-of-My-People type. I even went back and added an Ursun section to my name generator (wasn't sure why it didn't exist before) and did some refactoring, although "Lahar" isn't a legitimate name 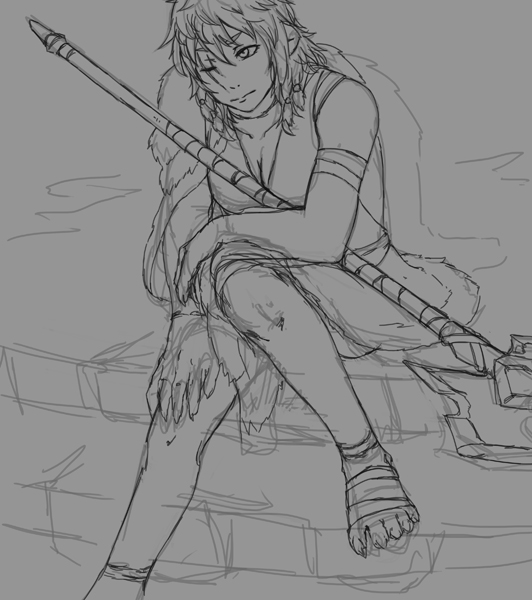 To hit the maximum adventure-trash dollar, there are these sad crystal dragons where you can get special powers if you kill them but only if you stab them in the eyeball(s). It's a really mean thing to do, but I needed an excuse for why the protagonist of my new story didn't die a horrible death between various life-threatening situations 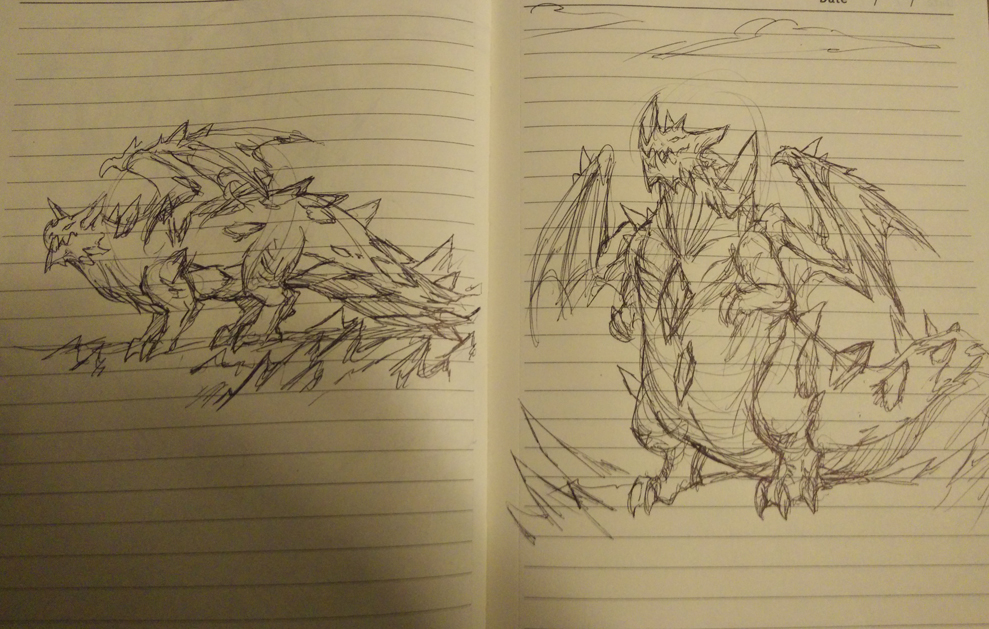 This line of thought made me laugh my butt off. PEAK EVOLUTION 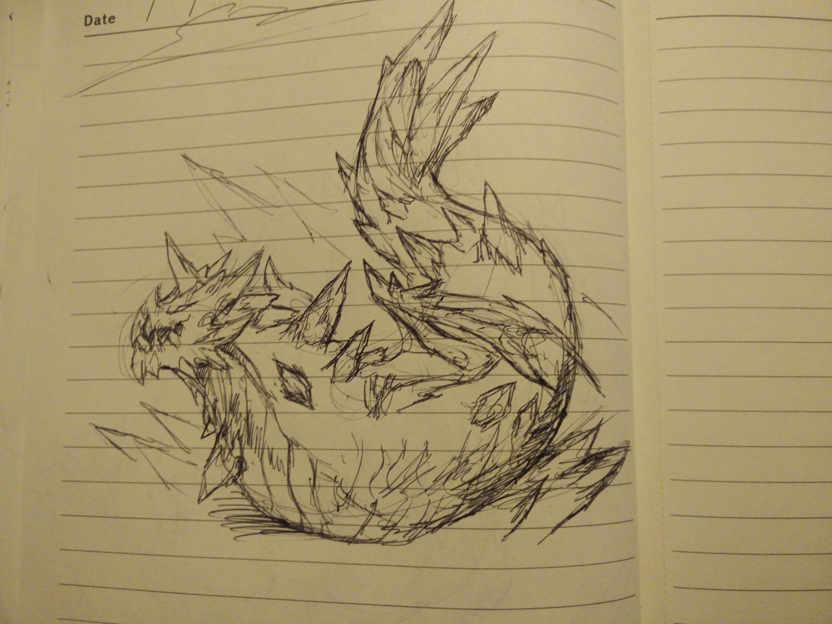 Oooooh. Just believe, you can do it! 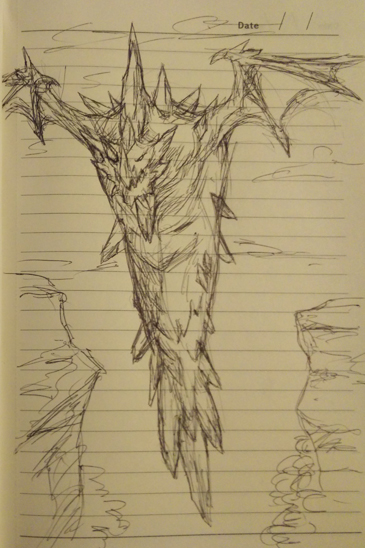 Rounding off this thread with a crappy MIDI cover, AKA: I threw a song into an auto-transcription program and spent the weekend trying to clean up the results despite having no real idea what I'm doing. You see, I have no sense of music theory, nor can I read notes, so leaning on robot crutches and other people's music is the best I can do for now. :'D

Oh, don't ask about the instrument choice... I have yet to hear a MIDI instrument that doesn't make my eyes water.

This program (costs $40 USD, I bought it) is really neat. Uses neural nets to calculate the absolute notes of the melody, percussion, bass, accompaniments, what-have-you, and spits out 500% unplayable sheet music that looks something like this:

So it's up to you to add and excise notes, which is still a non-trivial amount of work, since complex scores can be straight up garbled. It's fun, though! One thing I've found is that I need way fewer notes than I think. When it comes to MIDIs at least, it's easy for the sound to get crowded.

After spending about three years writing this complete pain in the ass chapter for my fanfiction, I finally put it up. It's not perfect by any means, and I'm going to regret some of the details soon enough, but I'm bloody tired. Thanks strangers for 100 +favourites. It always honours me when people tell me I've written the characters in a believable and compelling manner, considering I don't own a copy of the game, haven't played it for a second, and happily never will. :'D

Obligatory Not An Update. Just using this post to segue into a rant that's (un)related to the development of the chapter.

1) One of the things that vexes me about M Robin-centric stories, besides stories about M Robin being generally unenjoyable, is when they try to make him talk strategy. (The character is canonically a tactician.) Every time, I don't know if there's a single exception, he sounds like he has no idea what the hell he is talking about. Y'all please read The Art of War and play some StarCraft.

2) One of the things that vexes me about Lucina-centric stories, besides stories about Lucina being generally unenjoyable, is when they drill her character for seemingly no reason. Now, Nintendo's website describes Lucina as "kind" and "just." Typically, she's portrayed as not kind, not just, instead she lets ugly impulses control her on top of her being incompetent, and if she argues with or about Robin, she's almost always monkey-hammered into looking stupid. Y'all guys allergic to Lucina saying or doing something smart?

I know, dead fandom and all, but may there be a higher ratio of stories in which she is cool and not awful, thanks, because through all these years that ratio is razor thin. To be fair, she doesn't seem to have much going for her in the actual game, either. (Note: I don't profess myself to be a fan of either of these characters.)

3) RE: characterization. Lucina has like 10 friends all with their own annoying little quirks. Cue my going through a very real phase of trawling through wiki pages while wondering "who the hell is this?" for every member of the cast. Oof. Though, I think characterization doesn't have to be complicated and often isn't. I wing it for the most part because I can't stand reading/writing character biographies, where value to effort is asymptotically approaching zero. I may have said this before: look at some pictures, read some quotes, read some spoilers, be like Kirby inhaling character traits, ya good.

4) I can't believe the term "bluenette" is still in fashion. It's a uniquely made-up word to crown all the inappropriate hairstyle/gender-based epithets out there. Ok, when you think about your friends and family, or better yet, when you think about yourself, are y'alls' most pressing quality really your hair colour/gender? It's bad enough to refer to the narrating character as "the boy" or some other impersonal epithet, without also tossing a wig on it now ("the blue-haired boy"). While we're on the topic of diseases unique to fanfiction, I can't believe "orbs" is also still in fashion. Just use their name. Just say "eyes." It will be ok.

So I might be able to close the darn thing off with another... 40K words or so. Given the speed I've been going at, see you in another three years.

Real confession on what even sparked the project: Lucina's FE:H portrait is cute. That's it. That's all. I mean, I think the doing's been alright: a light-hearted piece of adventure trash that tells lots of jokes, why not?

Back to Artist's Corner