My brother tried to have me watch this trains and zombies anime. People were getting chunks of hair torn from their scalps and body parts bitten off. Yeah, no thanks man. 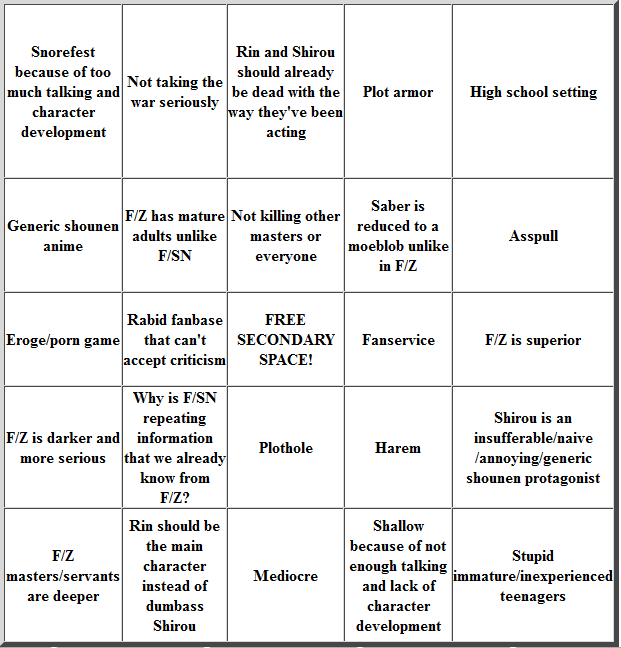 Well, some of these aren't wrong. Like "Rin should be the main character instead of dumbass Shirou." I second this notion wholeheartedly. Even if I don't actually like Tohsaka that much, at least she's resourceful and relies on her own wits.

This picture confuses my brain. 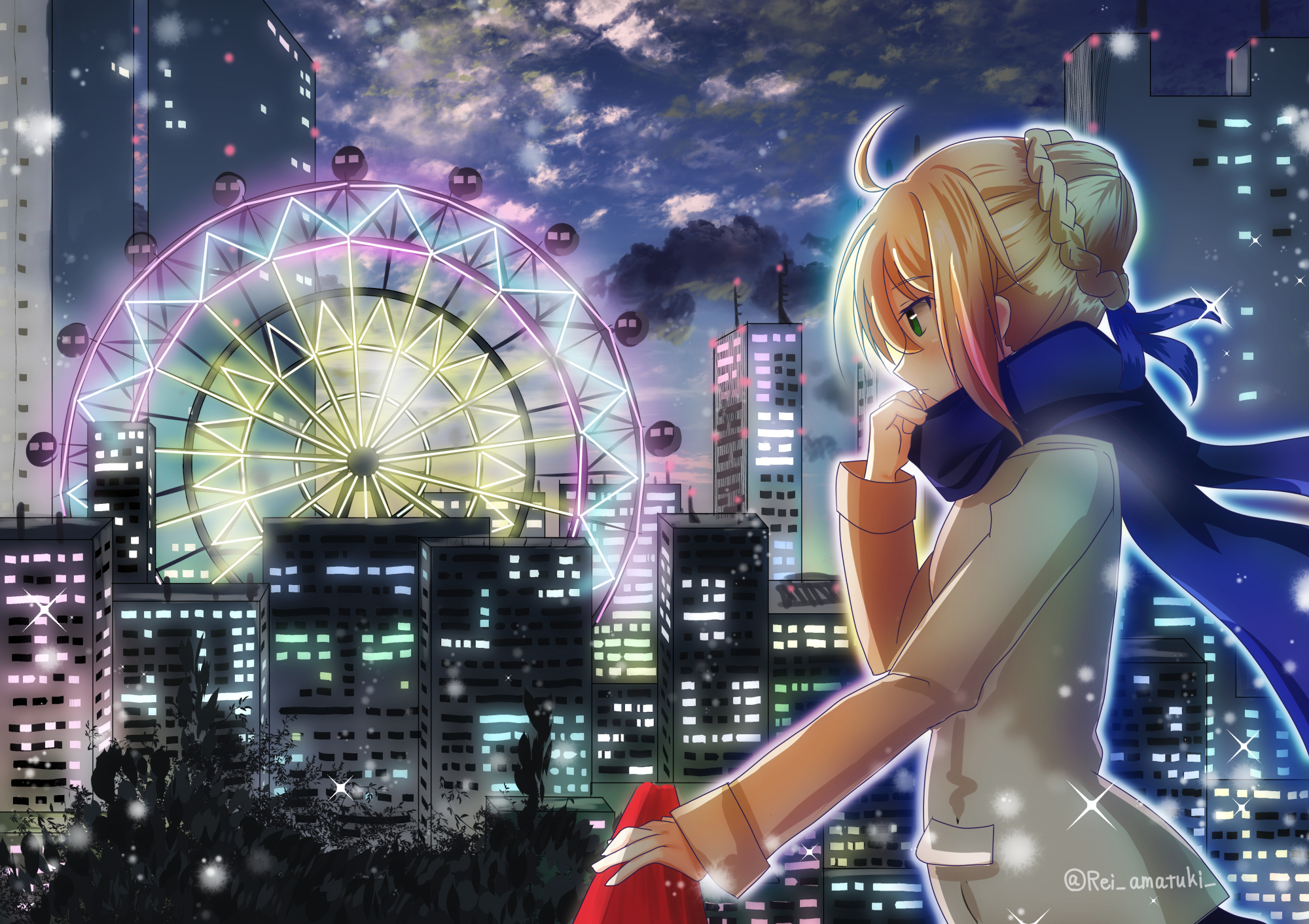 It's kind of sparkly and nice if you look at it from afar. But the individual details are hideous. It looks like a bad imitation of something better... however, I don't have any evidence, so confused it is.

Never can I not laugh at this after putting them together: http://youtubedouble...Ayarkhaan Enemy

I recall the cinematography in the cutscenes was actually quite good though. and the main questline was okay, although I struggled to remember what happened except that people got beat up and died sometimes.

So there's an Ea toy sword that lights up and does the whole spinning shenanigans.

I asked my dad, how do they wire the LEDs and the insides without getting it all twisted up when the blade spins?

He looked at me weirdly and said, [It's just a drill bit. Put a motor.] I was trying to describe it, poorly because he thought it swung around in a cone, until he realized I just meant that it spun.

kiznivers was a whole lot of boring, some excitement at the tail end, and ends all too quickly.

it just gets abit interesting, but then power of friendshiiiip.

The sheer amount of skill gathered in the vendor hall was astounding though. I commissioned a felt artist to make a felt Koffing for $40.

4kids dubs are a guilty pleasure for me. People always say they're irredeemable s­h­i­t but I can find them entertaining. 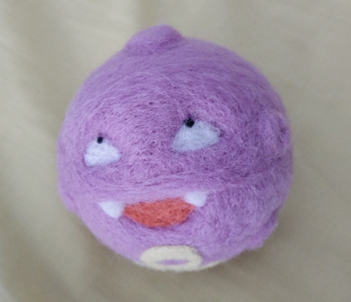 I feel like I should have more Koffing products.

Doesn't really count, but I was laughing my butt off at some Drakengard cutscenes. This one is like an action scene straight out of Berserk:

What a rollercoaster of a series. Spoilers-not-spoilers: everybody dies in a gory/shocking/tragic fashion. As much as the gameplay didn't survive the test of time (or even launch, really), the characters and universe did.

What do you expect from a man who conducted an entire interview with a hand puppet?

This is a good point.

Having watched Fate Extra and The Ancient Magus' Bride, I feel like I can finally enjoy some anime again. Darn me if Nero isn't charisma supreme. This is what all those other Fate series should have been like: charismatic Saberface kicking everything in the buttocks. Great success!

I think I have pretty simple tastes.

I don't understand people who get bunched up over spoilers. Clutch my pearls, it's akin to a religious offence, what with that visceral dismay some folks exhibit.

Most spoilers out there are dry facts about the plot: X betrays Y, Z is actually a princess in disguise, Gamma gets the girl. Plain snippets of the "what" in the story can drive fans to lose their head. Even recounting the back of the box or a description on the official website has triggered some daintily-manicured Spoiler Senses. Could it be because the "what" is given more weight than it deserves? It's not the only thing there is to a story. It's not even the most important thing. It's somewhere down there in the List of Important Things About Storytelling. And still somehow, surface-level plot points have the capacity to ruin somebody's personal revelation about the story, which is supposed to be sacred, or something.

Much more interesting and likely to be unique is how and why. Spoilers never capture these adequately. Spoilers can't even touch them, for that matter: they're intrinsically part of the source material, the way the story is told, the medium it uses. Protagonist saves the world: done a million-and-one times; how they do it, why they do it is what makes the story worth experiencing, and keeps those Stormlight Archive books coming. The interesting and compelling part of a story will always be intact regardless of spoilers, waiting there to be noticed and enjoyed and reflected on, except that the focus is on Snape kills Dumbledore!. Great.

This morning I was looking at a Discord server where somebody had left because of spoilers. Said spoilers consisted of: a character had an inconsequential thought at some undetermined time; the protagonists had to focus on saving the world; and, the entire adventure took about two years. (I looked again to make sure they were really that banal.) What exactly is so devastating about details that can apply to thousands of other stories? Or details that are completely pointless in isolation--who cares if the adventure took "two" years? One, three, five, it's just a number. Isn't the actual journey more important? There's basically no information here, and all the same, OMG spoilers. Oh, yeah, it's as if I were to watch somebody get offended and leave because another person said, "OMG."

I watched this 90's anime called Iria: Zeiram the Bounty Hunter. Pretty decent show with great production quality. I thought there was going to be a bounty hunter called Zeiram. Instead, Zeiram was a freaky alien who gave off serious Bio-Broly vibes (or the other way around, considering the respective release dates?). Jesus, that creature was horrible.

My brother was watching an episode of Cheat Magician. Jesus, it's like everything I hated about late 2000s anime made a comeback.

> MC walks into a room where a female character is undressing

Why doesn't he knock??? Oh that's right, then THIS SCENE wouldn't happen.

Nakama BS, fanservice gags, teleported-into-another-world premise, no-personality Gary Stu, harem wankery, it's alllllllllll here, distilled into 100% derivative garbage juice. If they pulled out some random isekai fanfiction and gave it a show, it couldn't be worse. I suppose that's literally what Cheat Magician is, though. Some random bottom of the barrel isekai fanfiction that somehow got a show.